Password Depot reliably protects your passwords and documents from unauthorized access! Whether you work at home or in a major corporation. On your Windows, Android, iOS or macOS device.

Maximum security for your passwords

Based on the highest security standard of AES (Rijndael 256) double encryption, your passwords are protected from external access optimally. 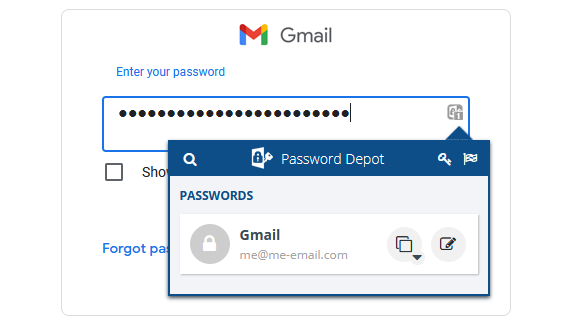 Auto complete of your data

Your access data will be entered automatically in your browser. But not only that: Enter any data automatically that you normally type in manually using your keyboard.

Do you work with your Windows computer or iMac during the day but would like to use your iOS or Android smartphone in the evening? With Password Depot you can access the same passwords using different devices.

Your data is safe with Password Depot. This has been documented by the security experts of SySS GmbH under Sebastian Schreiber and Matthias Deeg in extensive security and penetration tests in April 2021.

No matter, if Fraunhofer Institute, CHIP or PC Magazin - since 2007, numerous awards have proven the reliability of Password Depot.

All confidential data safely in one place

Apart from passwords you can e.g. also store your software licenses, documents, TANs and credit card data in Password Depot.

With Password Depot Enterprise Server, you can manage password databases via network to use them together as a team.

You decide where to store your confidential data!

Manage passwords, documents, identities, debit or credit cards, Remote Desktop Connections and much more of your confidential data centrally and company-wide. Store your data on your own server and not somewhere in the cloud!

Use databases collaboratively with all authorized team members.

Arrange your users by departments and groups in a transparent manner, or import from Active Directory.

Assign access rights according to databases, folders or single entries.

Receive notifications for user-defined events, e.g. access to an entry.

Thanks to the sophisticated software architecture, you will benefit from Password Depot immediately — without extensive, expensive training!

We will be happy to provide all information and consulting services.

Ensure GDPR compliance with our security software made in Germany: Password Depot has been developed in Darmstadt, City of Science, for more than 20 years!

Our customers as well as the professional trade press are impressed with Password Depot!

Not only the trade press is enthusiastic about Password Depot

We can probably say that using one of the many popular password managers is definitely more secure than saving passwords to Excel sheets or writing them on small pieces of paper etc. However, in many cases users have to upload their data to servers in foreign countries which is definitely a problem. Other password managers leave all data in non-encrypted form in the memory once the session is finished. That’s a no-go! And that is why you can decide where you want to store your data with Password Depot. Besides, as far as this is possible in the context of the complex storage management of Windows, your data is always encrypted and deleted from the memory if no longer used.

Of course, our point of view is not objective as far as this question is concerned. However, we can provide some additional facts for further explanation: In many cases, password managers that are particularly easy to use are mentioned and awarded in test reports. However, test reports do not take into consideration that quite often these tools are developed in the USA and their users have no choice but to upload their passwords to the companies’ US servers. One of those test winners that has been awarded quite often in the past has been criticized a lot in the last few years because it became known to the public that passwords of users had been stolen. On the other hand, other password managers leave all passwords in plain text in the memory after the program has been launched initially.

You can use Password Depot to autofill your access data in your browser. To do so, a browser add-on is required. At the moment, the add-on is available in Chrome, Firefox, Edge, Opera and the Internet Explorer.